She also does this..

Today we’re inspired by the work of Numen / For Use called Tape Paris, currently installed at the Palais de Tokyo till 11 January 2015.

An immersive artwork that spans  the front entrance-way of the Palais, it only allows the viewer to experience as much as they dare to. Crawl thorough it, walk at full height, look from afar, above or below; the feeling of being inside the outside, pervades at all levels.

Tape Paris is a version of what has been several other Tape cities, and is part of the exhibition Inside, an exploration of ‘a passage to the interior of the self, for which the exhibition space serves as a metaphor.’ That’s what Palais de Tokyo say; we think it works!

All images borrowed with thanks!

If André Kertész (1894 – 1985) had followed his family’s wishes, he would have been a stock broker his entire working life, and the world would have been bereft of his experimental and unorthodox contributions to photography.

And even when he did make a name for himself, he was often told that his photographs ‘spoke’ too much, as the editors of Life magazine told him in 1937.

But Kertész knew what he wanted to do and what he was good at, and after teaching himself photography at an early age, he went on to photograph the local Hungarian countryside, his experiences in the trenches during World War I, and later on when he moved to the U.S., his experiments with shadows and distortion mirrors.

Kertész sadly never achieved the critical acclaim and fame he desired for most of his career, and his struggles to speak English and be accepted by critics and audiences let him feeling excluded for most of his life. Kertész was also criticised for being more of a spectator than a commentator in his images, and his photographs being apolitical didn’t work in his favour during the two World Wars. However despite the absence of any strong comments or accolades from critics, Kertész is still considered to be the father of photojournalism and many years later his images still inspire with their simplicity and timelessness.

For more on André Kertész

We featured Philippe Halsman’s iconic jump images last week, but we could only let a few days go by before we brought up his series on Dali’s moustache.

Halsman and Salvador Dali were very close in that they both tried to push the boundaries of perception and imagination, as far as science and existing technology would allow. They also both escaped to the U.S. from Paris in the early 1940’s, and left the war behind to reach New York barely a few months apart from each other. Having frequented nearly the same localities in Paris, it was strange that they had never met, and sheer serendipity that they got together in New York for what is considered to be one of the most intense and ambitious collaborations between an artist and a photographer over 37 years.

Such was their relationship that Halsman has been quoted as saying – Whenever I needed a striking protagonist for one of my wild ideas, Dali would graciously oblige. Whenever Dali thought of a photograph so strange that it seemed impossible to produce, I tried to find a solution.

We are delighted to present our favourites from Dali’s Moustache, a 1954 publication of 36 different views of the artist’s moustache that Halsman captured

Along with being a remarkable portrait photographer with 101 Life magazine covers to his credit, and jump images of nearly every US celebrity of his time, we’re inspired by Halsman’s ability to hit the nail on the head when he says that ‘ a true portrait is the image which reveals most completely both the exterior and the interior of the subject. A true portrait should, today and a hundred years from today, be the testimony of how this person looked and what kind of human being he was.’

Martin Parr, one of our favourite photographers, never fails to capture those aspects of being British that are especially endearing.

Here are a selection of his images (some we’ve featured before) from ‘The Non-Conformists‘, a body of black and white images taken from the 1970’s when Parr moved out of London to settle down in the little mill town of Hebden Bridge in West Yorkshire.
That the photographer dotes on his subjects is clearly visible,
that he captures the moment you think no one is watching, is his skill,
and that he makes the pomp and scone loving British more lovable, is his art.

We recently came across the haunting images of Leonce Raphael Agbodjelou at the Pangaea: New Art from Africa and Latin America exhibition which is currently on view at the Saatchi Gallery. Though all the photographers featured deserve mention when art from these regions is referenced, Agbodjelou’s images made us halt in our tracks.

One of the prominent photographers from Porto Novo in Benin, his work borrows from both the modern and the traditional, and throws light on how the world seeing Africa, leads it to see itself. Featuring dramatic masked Egungun figures, bare breasted women, and a colonial style backdrop in some of the images, Agbodjelou references both the history and the ritualism that cloud our gaze when we look at this continent. At the same time his images stand as testament to how Africa has embraced and shared those aspects of its culture that are rich and unique, while blending in with other social and cultural aspects that the globalised world favours.

Capturing an image of someone jumping is really harder than it seems. You are most likely to have made several attempts with the ‘jumpee’ losing energy and enthusiasm with each successive take. But Philippe Halsman seems to have mastered the art especially when you begin to ask every famous personality you meet to pose for a jump shot. Since in the very act of jumping, the jumpee’s attention is mostly directed to the act of jumping, the mask they usually carry tends to fall away. The end result is a brilliant show of limbs and smiles.

Halsman counted Albert Einstein among his close friends and even took the famous Einstein portrait that featured on the cover of TIME in 1999. He worked with Salvador Dali and Alfred Hitchcock and was even lucky enough to have Marilyn Monroe pose for him. His adult life began quite dramatically when at 22 he was accused of murdering his father while they were out on a hike. Later released from prison he soon had to escape Europe to get away from the war. Moving to the US, he made a name for himself as an expert portrait photographer and had his images feature in many a Life and Vogue spread.

We’re inspired by the poise in his jumps and by the fact that though essentially the same action, no two images are alike.

If you like Halsman’s jumps, check out his 1959 Jump Book that features 178 photographs of jumping celebrities. There’s also a movie Jump that’s based on the murder mystery that surrounds his father’s death.

Yesterday we watched the inspiring Advanced Style, a film that follows some of the women featured by blogger Ari Seth Cohen on his eponymous blog. These grand dames of style are anything over fifty years old, and all take the greatest pains and delight in dressing up and being beautiful in their own way.

We came away with big smiles on our faces, and the realisation that no matter how old we are, we never get tired of wanting to be ever beautiful and dressed up.

There are a multitude of inspiring quotes in the film, a world of advice and examples to learn from, but we won’t paraphrase because they are best delivered by the people who live them. But we will share with you some of our favourite images from the blog. They are an inspiration to all ages and genders.

It’s possible that photographer Sara Naomi Lewkowicz faced a barrage of criticism for not intervening while taking the pictures that make up her 2012 series ‘Shane and Maggie’. What initially started out as a project following felons who have been released from prison and are readjusting to life outside (Shane in this case), Lewkowicz’s reportage took a different turn when one night Shane and his girlfriend Maggie got into a serious physical fight that ended in Shane getting arrested.

“Shane was like a fast car. When you’re driving it, you think ‘I might get pulled over and get a ticket.’ You never think that you’re going to crash.”

The series then goes on to show how Maggie picks up the pieces of her life and moves back in with the husband she has separated from who is also the father of Kayden and Memphis.

As Lewkowicz rationalises,’While this story is, in part, about domestic violence, it is not a reportage on a domestic dispute—it is not a news event. It seeks to take a deeper, unflinching look into the circumstances that transform a relationship into a crucible, and what happens before, during, immediately proceeding and long after an episode of violence takes place. With this story, it is my goal to examine the effects of this type of violence on the couple, the absued, the abuser, and the children who serve as witnesses to the abuse.’

This series is one of the most hard hitting series we’ve shared on this site. And though it made us sad and uncomfortable to be even in the presence of these images (the photographs are currently on display at Somerset House as part of the 2014 Sony World Photography Awards), there is something in knowing that it is photographs like these that take the conversation forward, that reduce the discomfort and example that Maggie is, that make us more amenable to talking and looking at a problem. This is not the pretty esoteric art that we’re usually looking at, but a reality that we need to face.

Sara Naomi Lewkowicz has been awarded the L’Iris d’Or/Sony World Photography Awards Photographer of the Year for this series, winning the award from among 140,000 photographers from 166 countries.

The sound of eerie.
a slice of light cutting through the fog,
then black again. 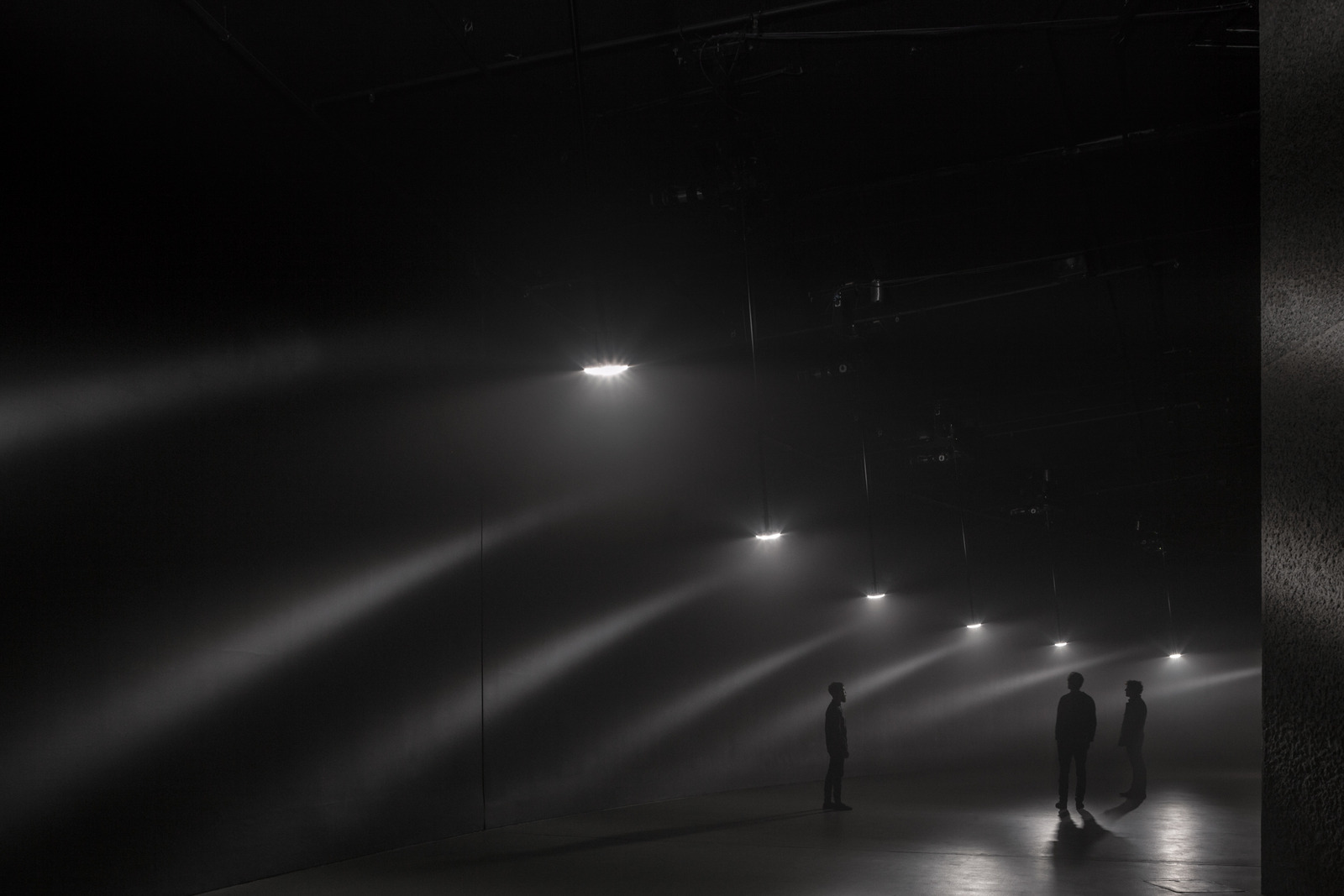 The shadow of the person standing somewhere in front of you,
the hollow shuffle of the group behind,
then lost again to the black that fills the Curve. 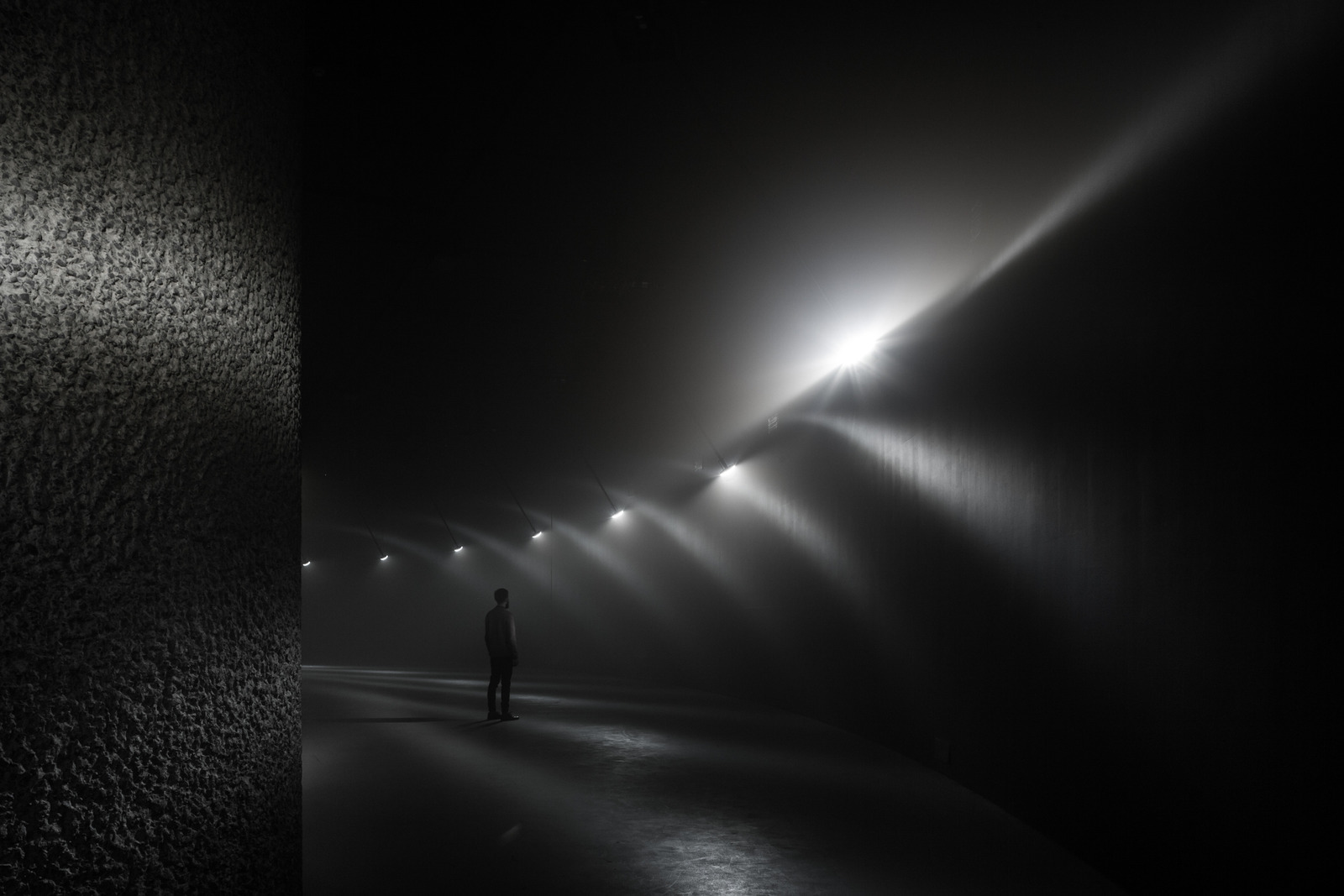 Welcome to Momentum, one of the latest works by the acclaimed United Visual Artists at the Barbican’s The Curve gallery. Combining light, sound and the movement of the visitors, this is a work like we’ve never experienced before. Being thrust into a darkness that alternates between pitch black and smoky shadows, depending on where you stand, is not something we’re used to. And the smoke is not exactly smoke we think, just the way the light feels….
Where’s Health & Safety when you need it? 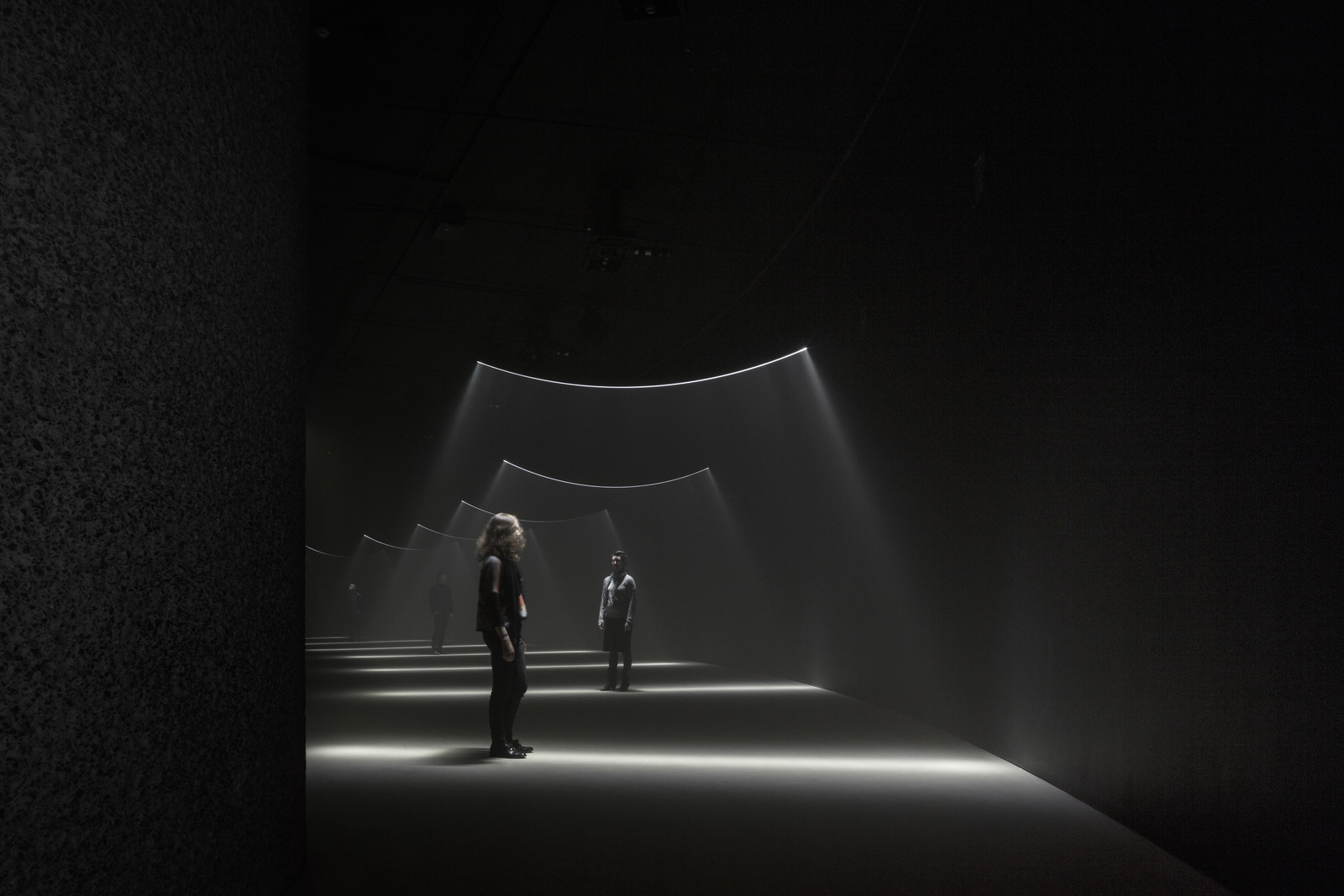 Rest assured the maximum damage this work can cause you is knocking into the wall. Or bumping into the person in front/behind you.
But we guarantee that if you do take the first step into the darkened abyss that Momentum has transformed the Curve into, you won’t come away disappointed. And with many images in your head that no camera can capture, or no two people can witness.

United Visual Artists is a collective of London based ‘visual orators’ as they call themselves. With over ten years of work behind them including an intervention at Sou Fujimoto’s summer pavilion at London’s Serpentine Gallery in 2013, Volume at the Victoria & Albert Museum garden in 2006, and numerous projects for the band Massive Attack alongside re-designing the main stage for Coachella in 2011, we’re always in awe of their projects and the way they make us feel and see ourselves in space.