David Bailey’s Stardust at the National Portrait Gallery gives visitors the perfect opportunity to immerse themselves in what Bailey does best – take fantastic images of the beautiful and the famous, but without letting the glamour overwhelm you.

‘The pictures I take are simple and direct and about the person I’m photographing and not about me. I spend more time talking to the person than I do taking pictures.’

Most of the images are black and white, and though the display does highlight Bailey’s other images taken in India, Sudan, Australia, and London’s East End, the main focus is on his celebrity images. And it doesn’t take much to figure out why it is with these images that the maverick photographer has built up his reputation and his fan base.

One of our favourite exhibitions to currently see in Vienna is Evil Things – An encyclopaedia of bad taste at the Möbel Museum Wien. A tongue-in-cheek look at those everyday objects that make us grimace or laugh, that have had an unexpected impact on society or the economy, that are utterly useless, have big design flaws or are just plain rude – there’s an interesting conversation to be had around each and every one of these objects.

The exhibition also invites visitors to leave behind their bad taste objects with a story of why they consider the item to be terrible. All the written humour and indignation was completely lost on us given the German wall text, but what we did witness is that one person’s jewel could very easily be another person’s garbage. And since we ourselves possess and have gifted to friends a few of the displayed objects, we completely put down bad taste as being in the eye of the beholder. Now you tell us, why would anyone pass up on the chance to own a set of wind-up teeth that walk across the table? That’s so many hours at work taken care of!

Some of the objects that made us chuckle…

Nearly all these pictures are courtesy eBay.

On a more serious note, the exhibition is based on a 1912 publication by the art historian Gustav E. Pazaurek where he drew up a criteria on taste mistakes of all kinds. Pazaurek also believed that every institution or museum should have a chamber of horrors cataloguing past design mistakes for students and designers to learn from.

This exhibition includes loans from Pazaurek’s original collection as well as new items from several other museums. Getting visitors to bring in their items as this exhibition does, is also an effective way of acknowledging that everyone has taste or at the least has an item to be commemorated to the Chamber of Horrors.

A definite must-see even if you don’t understand German, we’d also encourage you to wander through the rest of the Möbel Museum which is magical in a quiet, non-touristy-museum sort of way…to us this is the best kind there are!

Lazy beaches, idyllic scenes, quotidian life that is peaceful but not mundane, the selection of works by Eric Fischl on view at the Albertina in Vienna left us hungering for more on a recent trip. From glassines to watercolours and sculpture, his ability to capture fluidity across different mediums is inspiring and allows his stories to flow well beyond the edges that frame them.

As Fischl says on the wall text, ‘trying to control the pooling of liquid colour so it captures the feel of muscle, motion and light while allowing it to do what it does naturally, is my most satisfying discipline.’ We believe it’s also his most endearing feature.

Here are some of our Fischl favourites, from the show and otherwise.

Fischl is also known for his oil painting on glassine, a very thin smooth paper that is air and water resistant. He places layers of these sheets one on top of each other to form a narrative, thereby allowing for the possibility of multiple scenarios.

Tucked away behind the sandy beaches and billowing silhouettes that comprise this exhibition is Fischl’s Tumbling Woman sculpture. Not just any woman, this sculpture symbolises the lives lost in the 9/11 World Trade Center tragedy. It was first installed at the Rockefeller Center but due to complaints from the public was later covered and then removed.

Whether this sculpture symbolises a fallen or a leaping woman, someone being pushed or forced to jump is immaterial. It was Fischl’s aim to turn the conversation away from the destroyed towers to the people who lost their lives in the tragedy, and in this he succeeded.

Eric Fischl: Friends, Lovers and other Constellations
Till 18 May 2014
Albertina, Vienna

You know that Darren Almond’s To Leave a Light Impression exhibition at White Cube Bermondsey is special the moment you walk through the door.
In a quiet subliminal way, it depicts the majesty of nature while highlighting the limitations of what we as humans can experience with the senses we have naturally available to us. When technology and in this case long exposure photography comes to our aid, it opens up a world of untold beauty that we otherwise would have been unaware of.

Comprising of two series – Fullmoon and Present Form, the former depicts landscapes in Patagonia, Tasmania and Cape Verde all taken in full moon, pollution free light, while the latter captures the standing stones on the Isle of Lewis in the Outer Hebrides.

Both series stand tall in the galleries, and it is only when you find yourself staring absently at an image where time is traced by the length of a star shooting through the sky, that you realise just how powerful these images are. It is art that makes you think about the invisible, the real lived experience, and how this artist has frozen time and light within a frame.

Images (c) Darren Almond and various sources. Borrowed with thanks.

In our exploration of how colour defines and influences our impressions of people and places, we came across the work of Tony Ray-Jones.

Ray-Jones is known both for his colour images of America taken in the early 1960’s, and his later black and white images of England from 1965 onwards. He tragically died at the young age of thirty from leukemia, but not before leaving behind a large collection of images that capture both the colour consciousness of America (in more ways than one), and the stark natural eccentricity of  the English.

Ray-Jones’ images are said to have a rare blend of compassion and irony, and were highly influenced by the films of Vigo, Bunuel and Fellini along with Charlie Chaplin and the Marx Brothers. Here are some of our favourites: 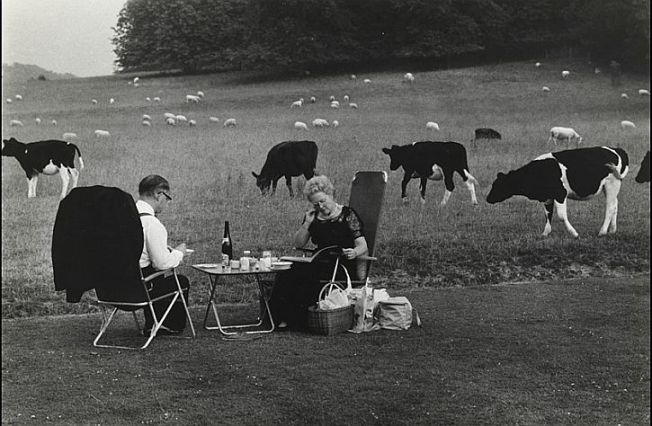 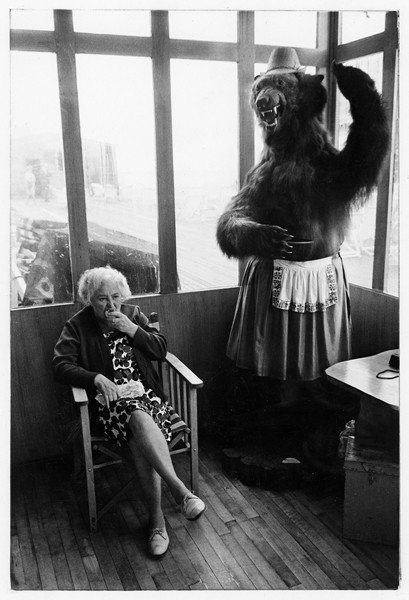 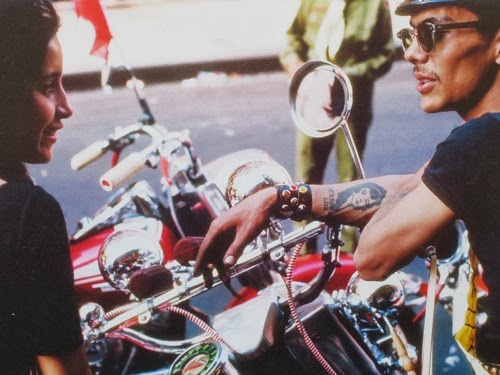 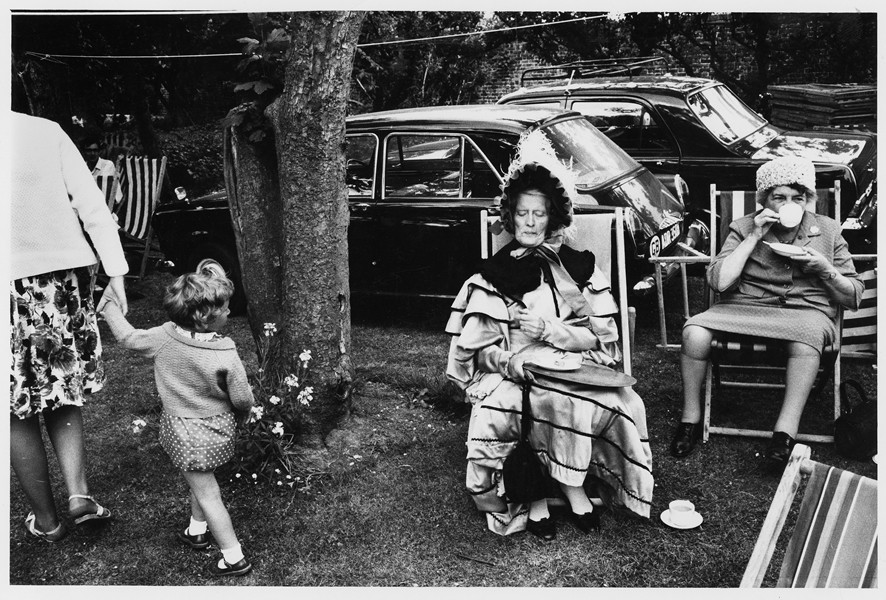 To see more of Tony Ray-Jones work, visit the Science Museum where they currently have on display a selection of fifty previously unseen works from the National Media Museum’s Ray-Jones archive. Selected by and interspersed with works of Martin Parr, another photographer with the uncanny ability to capture quintessential English society, these images make us all the more fonder of our adopted home.

An artist whose playfulness both amuses and baffles us,
who takes the everyday apart to put it back in ways you never thought of,
Martin Creed is one artist we turn to when we need to be reminded that art is as much about nothing as it is about everything.

So with air filled with balloons,
works that are in all honesty described as ‘A door opening and closing and a light going on and off‘,
with cacti arranged in a logic that only man can give nature,
and a piano that plays no symphonies but where the human hands of an enlisted gallery assistant play the chromatic scales one note at a time…
Everything about Creed’s work shouts ‘does what it says on the box’.
but in a way that forces us to observe how trite our thought processes are,
and how quickly we follow what the majority of society thinks, does and expects,
because that way life becomes easier,
faster,
and quicker to the top.

Martin Creed’s current exhibition at Hayward Gallery is aptly titled – What’s the point of it?
It gave us a chance to refresh and to stop expecting to ‘get’ each work just because we ‘see’ so much art.

We were humbled by the sapient simplicity of Creed’s work – nothing is as complex as you think it ought to be, yet he never fails to hit the nail on the head, right through the wall.

And we cannot fail to mention that if there ever was a work we loved and would want to possess, it would be Creed’s Work No. 850 that featured people running as fast as they could across the Duveen Galleries at Tate Britain in 2008. We’ve been looking for ways to gush about this work since the first day we started Beanstories – in all secrets revealed, this hits our spot.

Martin Creed: What’s the point of it?
Hayward Gallery
Till 27 April 2014